As promised, I have a great story and some artifacts to share about the July 1944 Ringling Bros. and Barnum & Bailey Circus.  I asked both of my parents to write about their experiences with regard to this historic tragedy that took place in our very own capital city.

Dad writes this about his recollection of the events of July 6, 1944:


I was almost five years old on July 6, 1944. My mother promised to take me to the circus on Barbour Street in Hartford, about two miles from where we lived on Spring Street. I did not fully realize what a circus was, but I knew that lions and tigers would be there, and I was wildly excited. I remember what a beastly hot day it was as I walked with my mother to G Fox, the local department store, on Main Street where she was going to shop before we headed up to the circus. When we left G Fox, she decided we would not go to the circus because it was too late. I remember clearly my disappointment and the very big fuss I made. We crossed the street to go home and were in front of the Planters Peanuts store across from G Fox when all kinds of sirens began to blare and a barrage of  vehicles were running past us, heading up North Main Street. Neither my mother nor I could imagine the horror that was unfolding. Sirens and more sirens persisted. People were huddled together. We walked six blocks home and saw more trucks and cars speeding down Broad Street near where we lived. I now know that the Hartford Armory on Broad Street had served as a temporary morgue. I remember the horrible smell of the fire and the black smoke that covered the whole city. I was not old enough to understand the scope of the tragedy, but the memory of those sights and sounds that day are indelible and as vivid as if it were yesterday.

My Mother writes what she has been told happened since she was a mere two years old in 1944.

The Ringling Bros. and Barnum & Bailey circus arrived in Hartford, Connecticut early in July 1944.  The Greatest Show on Earth was highly advertised to the public with banners and brochures prominently displayed in windows of restaurants, markets, clothing stores, street posts, and buses. 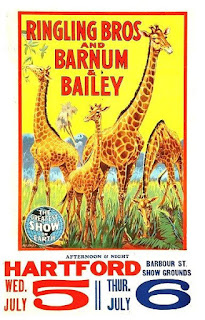 Although I was only a toddler in 1944, I recall to this day, my parents and grandparents solemnly recounting the story of the circus fire to countless people throughout my childhood.  The enormity of the tragedy was not lost on me and I later learned the death toll rose to 167 and Hartford was a city painfully changed forever.

My Dad planned to take my brother John to the circus that July 6th and pre-purchased 2 tickets to the matinee performance on Barbour Street in Hartford's north end.  My Dad, however, was unexpectedly needed at work and, to their good fortune, they missed the horrendous tragedy at the circus that day. 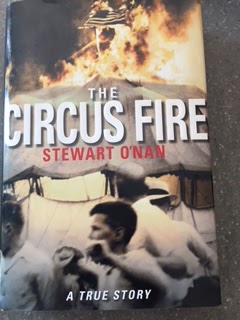 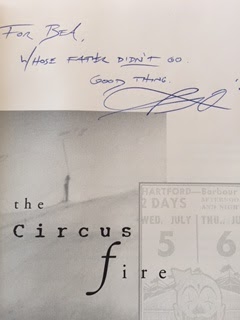 On July 6, 1944 the big top of caught fire during the afternoon performance.  Seven thousand people were inside.  I refer you to Stewart O'Nan's nonfiction book, The Circus Fire,  to read about the tragedy in full detail.    I had the pleasure to meet Mr. O'Nan at a book luncheon several years ago.  After his presentation, I spoke with him and told my family's story of that fateful day.  Mr. O'Nan signed a copy of the book for me and in his words wrote: "For Bea, whose Father didn't go.  Good Thing."

I still hold the original 2 circus tickets to the July 6, 1944 performance. 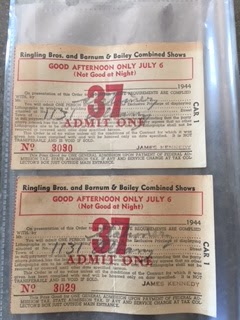 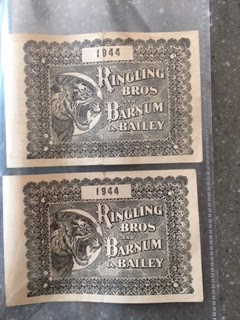 Thanks for allowing me to share a piece of our family's history with you.  I hope you enjoyed it.

Posted by We Have It Together at 6:47 AM

Email ThisBlogThis!Share to TwitterShare to FacebookShare to Pinterest
Labels: travel